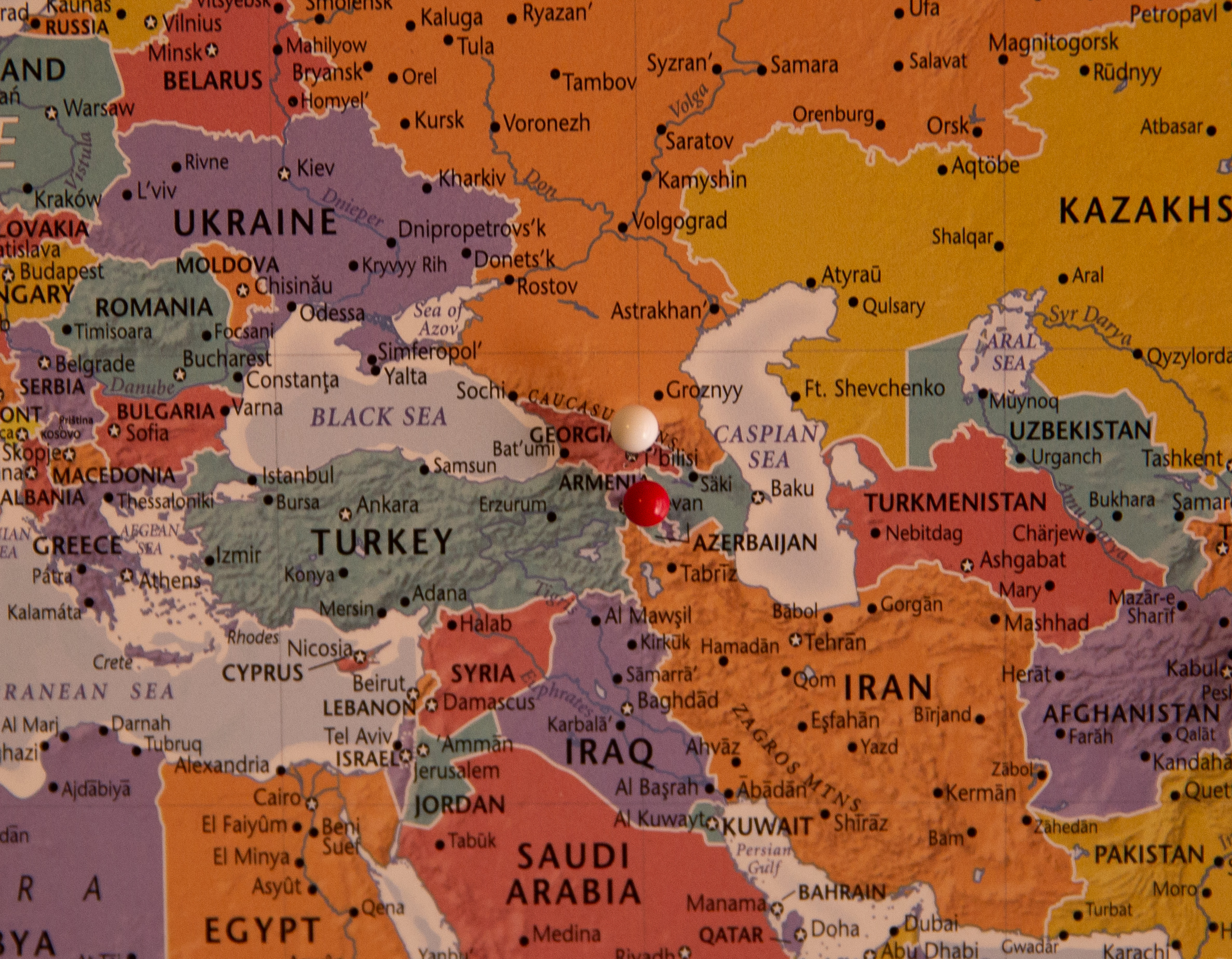 Before arriving to Yerevan, Armenia, we decided to spend a couple days in Tbilisi, Georgia. When figuring out the cheapest way to get there from London, we found that flying into the western airport of Kiev and leaving from the eastern airpot of Kiev was our best route.

We walked over to the nearby tram station and waited for the first tram to arrive.

We quickly hopped in! Almost had the whole tram to ourselves.

My Russian came in handy, at both the airport and talking to the tram driver to make sure we were on track. We got off closer to the center of Kiev, ate breakfast at a McDonalds, and found the Sky Bus.

The direct bus from the center of Kiev to KBP airport only cost $3.50 pp!

Once we arrived to the airport, we got our tickets, passed through security, made it to our gate, into our plane, and found our seats. Having done my job, getting us from point A to point B, I got some well deserve rest. On to Tbilisi, Georgia!

We arrived to the airport and took a bus to the closest metro station. From there, my Russian came in handy when the woman at the counter explained to me how the metro card worked. (2 GEL for the metro card and 0.5 GEL per ride)

We explored the city by metro and bus. Really cheap and easy!

Headed to the center to hunt down all the coffee shops.

Both of us hardcore cheesing 😀

We then saw a giant statue in the distance and decided to hike up to it.

Stopped for some freshly squeezed pomegranate juice along the way.

We met and took a selfie with Kartlis Deda, she was cool.

We explored her neighborhood a bit as well.

We did a lot of exploring in Tbilisi and even made it to church!

Our favorite part of Tbilisi was a hidden gem of a restaurant we stumbled upon. It had a wonderful rooftop with a beautiful view of the city!

I am all about the cheap, overnight train ride. One of the first things we did after arriving to Tbilisi was go to the Tbilisi Train Station to buy our tickets to Yerevan.

I bought our tickets in Russian, however, I later realized that the lady selling tickets at the counter spoke better English than me :p

Once we had our tickets, we were all sort for our night train in a couple days!

Obviously we bought the cheapest ticket possible. Can’t remember if it’s 3rd class or No class. All you need to know is that there are 4 bunks to a compartment (no door) and 2 in the aisle.

We took our last selfie before passing out for the night.

The next thing we knew, we had arrived to Yerevan!

P.S. The train ride was safe. Just keep your things between you and the wall if you are in the upper bunk or under your bunk (You can lift the bunk like storage) if you are in the lower one. The 2 women who were below us were very friendly 🙂

We hit a bit of a snag when we arrived to Yerevan. The forex counter was permanently shut down at the train station and ATMs weren’t working. Took me a bit of searching to find a working ATM outside of the train station. Once I did, we headed over to the metro to head to the city center!

The city was very clean with decorations here and there.

One thing I noticed compared to any other city was the amount of water fountains everywhere! Yerevan is all about keeping everyone hydrated!

From exploring, we discovered how cheap things were for us. Yagmur took advantage and got a haircut which included shampooing & blowdrying for only $6!

One of the most interesting things we did in Yerevan was go to the Armenian Genocide museum. The museum has you walk through a timeline of their people’s genocide from the early 20th century. For those who are interested in going, I recommend you to download the Yandex Taxi app (similar to Uber) to get there.

Throughout our trip we did our best to try as much local food as possible. At the end of our day, we tried to pick something new to try before passing out. One dish we enjoyed was lavash (all veg).

Daily costs in Georgia and Armenia greatly helped break the over-budget trend from the prior 3 trips. Flying from Kiev to Tbilisi reduced costs but there was no avoiding the larger airfare cost flying back to New York City from Yerevan.

Being able to take advantage by combining trips definitely makes a difference. Her budget only increased by 4.77% compared to 8.47% for London, leaving us at 31.67% LTD. Overall, I’m just happy we were able to stay under budget for this trip by roughly $300!

Slowly but surely we are making headway by completing 1/3 of our journey so far!

Took us a while to take our pic but we got it! Special thanks to the random pot growing who knows what plant which supported my phone 🙂

One Commnet on “The Adventures of Shawn & Yagmur – Yerevan, Armenia”