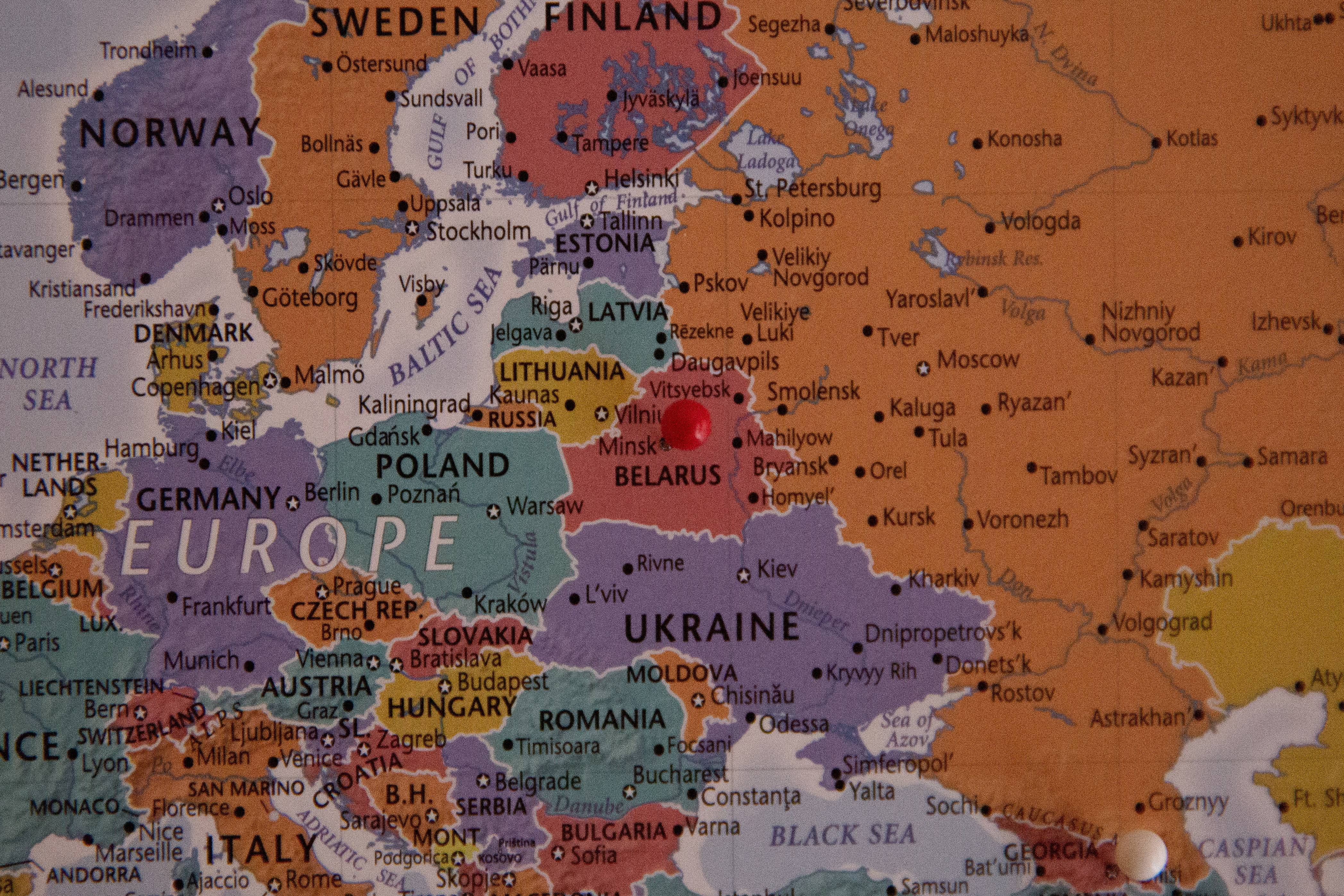 We woke up extra early to catch our 7:05AM flight from Ulaanbaatar, Mongolia to Minsk, Belarus with a layover in Moscow, Russia. The flight to Moscow was smooth. We followed the crowd and reached a point where you could go one of two directions. Left would lead you down to Customs where you can enter Russia. Right would lead you to some officers in their booths who would stamp your ticket and you can enter the transit zone of the airport.

There was an Aeroflot flight attendant pointing people to the correct direction. She was checking with everyone that was walking towards the transit zone.

“To Minsk” I told her when she asked where we were going.

“Do you have a visa?” she replied. I told her that we didn’t need one for Belarus so we were good.

“You need a Russian transit visa” she began.

“For what?” I asked confused. Normally a transit visa is needed if you are staying for more than 24 hours in an airport or plan to exit the airport during a layover in a country where you normally would need a visa.

“There is special law for flights from Moscow to Minsk. You need a Russian transit visa.” She explained.

“But I don’t want to enter Russia. Are you telling me that if I want to fly to Minsk, from Moscow, that I have to get a transit visa, exit the airport, then immediately walk back in?”

“Yes, that’s the law. The officers won’t stamp your ticket and let you through to the transit zone. ” she confirmed.

“This is only for flights to Minsk? Not for anywhere else?” I double checked.

“Yes just for Minsk.” she confirmed again. I couldn’t believe it. From all my years of traveling, I’ve never heard of such a thing. I was able to enter Russia without a visa (or so I thought, more on that later) with my Peruvian passport but Yagmur only has a Turkish passport and needed a visa.

“So let me make sure I understand this. We can’t go left because we don’t have a Russian Visa to enter Russia.”

“And we can’t go right, directly to the transit zone of the airport, because we are flying to Minsk.”

I continued to stare at her, baffled by the fact that she thought it was okay to end the conversation like this. I was basically told that I have no options and apparently that was a reasonable conclusion.

“Alright, so I guess we’ll just sit in those seats until we die then.” I thought to myself. I walked over to Yagmur, who was sitting down with our luggage. I explained to her the situation.

“What do we do?” She asked all confused. I wasn’t sure yet but I needed five minutes to think. I ran through different scenarios in my head and checked online about this Minsk to Moscow flight nonsense. Out of curiosity, I checked the official Peruvian website which shows all countries Peruvians can visit without a visa and I saw the below:

Both Russia and Belarus arw on the list of countries where Peruvians do not need a visa. However, there is a caveat. The red squared section translates to: The flight entering Belarus cannot be from any Russian airport. My mind was blown. I checked the official American travel website for visa rules to Belarus and saw the below:

To me it’s crazy how even though I literally can go to both Russia and Belarus visa free, I would need a Russian transit visa if I fly from Russia to Belarus…

I still couldn’t believe it. (1) I have never heard of such a rule in my life. (2) I have never had to think about laws regarding layovers when I purchase airfare tickets. (3) I should have read the full disclosure regarding the visa-free rules when traveling to Belarus.

Long story short, I messed up and I was devastated. However, there was one thing I knew for sure, there was no way that we were not going to make it to Minsk.

“Let’s just go straight to Turkey” Yagmur said a bit frustrated with the Minsk/Moscow visa rule. We were only going to spend two days in Minsk, so in her eyes, we might as well go straight to our later stop: Ankara, Turkey.

I headed back over to the Aeroflot flight attendant to discuss real options. What I needed to do now was buy a ticket that flew anywhere else.

Since Yagmur has a Turkish passport, she needs a visa for the Schengen zone. This makes things tricky when it comes to last minute country changes in trips when we’re in Europe, her options are limited. However, we do have a default country that when we don’t know what to do, we can always rely on: Ukraine. We both don’t need a visa, it’s super cheap for us, and I have a good friend there who’s always willing to help.

So that’s what we decided. We’ll head over to Kiev, spend a night there, and fly to Minsk in the morning. Below is our new itinerary for our 2 week trip:

Once I purchased our tickets online with my phone, the Aeroflot flight attendant called the other airline and printed our new tickets. We headed over to the transit zone, found a lounge, and chilled until our flight.

One thing I realized at the lounge was that I probably could have purchased a ticket to Minsk from Moscow if there was a layover elsewhere. Another thing my girlfriend wanted to do was just use our original ticket while in the transit zone. I advised against that idea. Our old ticket didn’t have the stamp from the officer and I have a no risk policy for these trips.

So apparently, there are no direct flights from Russia to Ukraine since their conflict a few years back. So our flight to Kiev had a layover in Riga.

Once we arrived to Kiev’s easter airport (Boryspil International Airport), we took their new train to the center of Kiev.

The Boryspol airport train station is easy to get to from the airport. Just exit the airport and walk right. Follow the signs and you’ll be there in 2 minutes. Once there, there’s a little booth, you can’t miss it, where you can buy your ticket. Be sure to withdraw some Ukrainian Hryvnia before heading over to the train station.

Artem, my awesome friend from Ukraine, met us at the train station. He kept to our tradition and brought us 2 apples in case we were hungry 🙂

We stayed with him for the night. Before heading home, he took us to a traditional Ukrainian restaurant for some local, Ukrainian food. I highly recommend the restaurant: Pan Garbuzik for some delicious food. For about 20 USD, 3 people can eat to their heart’s content.

Artem took us to the airport super early the next morning. We hopped on the plane and landed in Minsk around 10AM. At Minsk airport, you have to get travel insurance. There’s a little booth before going through customs where you can get it. It costs only 1 EUR (or 1 USD if you have USD) per day.

My Russian came in very handy when asking about how to get to the center of Minsk. There are several mini buses that will take you to a central bus terminal. We got on one, paid 4 Belorussian rubles (2 USD) pp and made it to Minsk!

We were so tired but we did what we could. We freshened up at our Airbnb (Minsk city center costs $27 a night) and checked out the restaurant Talaka (~$18 for lots of food and beer pp) which was recommended to us by our host. The food was delicious!

We walked off our full stomachs to explore the sights.

We saw what we could with the time we had at Minsk. It was definitely a bumpy ride on our way there. Our experience to Minsk emphasizes the fact to always have emergency funds planed in your budget when traveling. Regardless of the travel experience that you may have, laws and rules are always changing. Do your best on staying up-to-date on where you are traveling to and don’t fret when you face a road block. Remember, there’s always a way to get where you want to go!

Probably the most expensive day of my life! The total costs are extremely high for two main reasons: (1) The flight from Ulaanbaatar to Minsk is included at $509 pp (2) The additional tickets from Moscow to Kiev and Kiev to Minsk are also included at $293 pp. Total in airfare was $785!

Our 2 day trip became a 1 day trip and we got hit very hard. The additional cost of $293 for her flights from Moscow to Kiev and then from Kiev to Minsk really messed up her budget. 93% of her total expenses for Minsk was from airfare alone! While technically still under budget, the 5.78% increase to her overall budget, leaving her at 43.09% LTD, still hurts.

This was a pin we really had to work for! Crossing off another city and preparing for the next one!

Like I mentioned early, it was a tough journey getting to Minsk. We were really tired but we pushed through and made it!