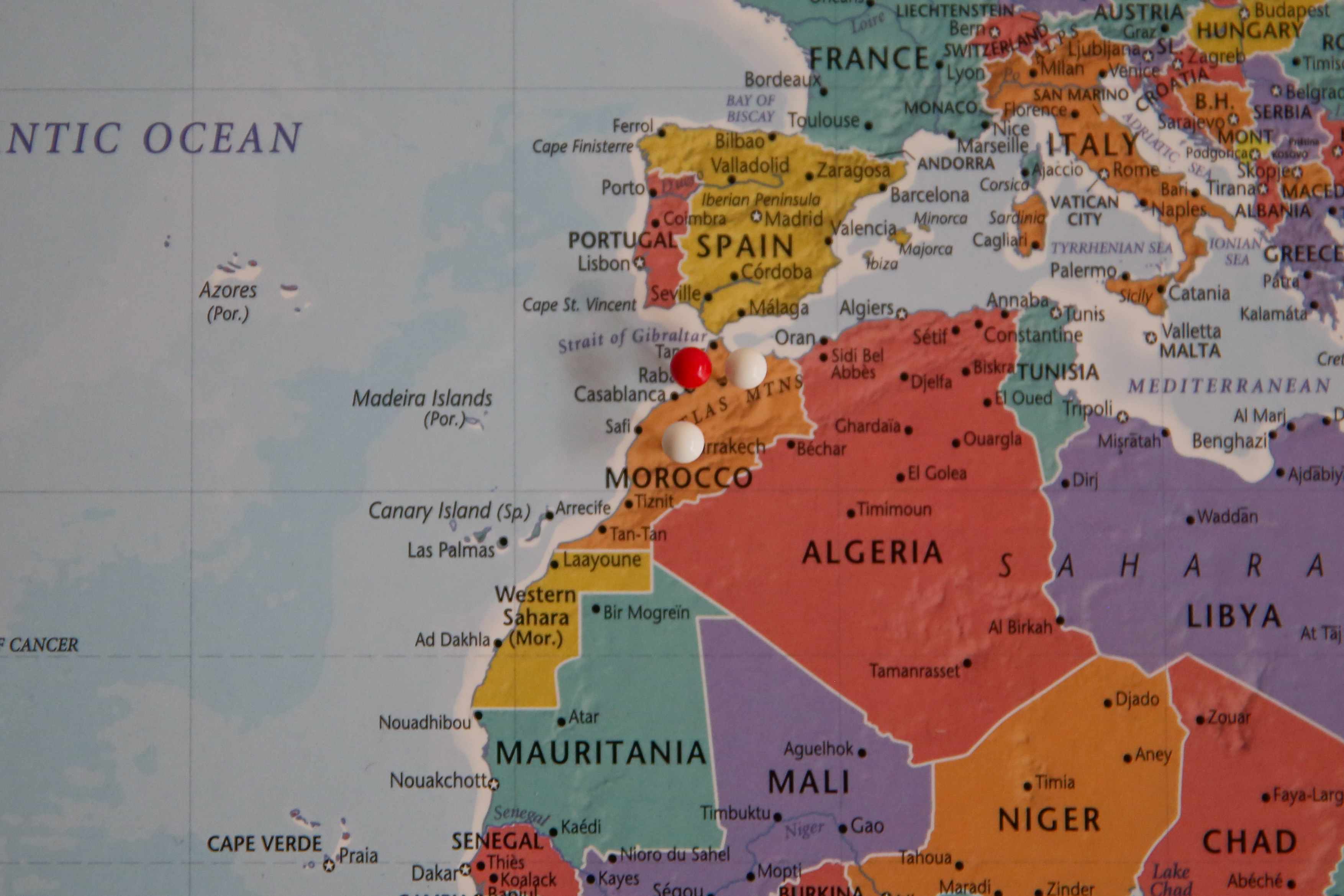 Another sleepless night. Another overnight flight. We arrived to Casablanca at 3AM, exhausted. After blinking my eyes several times, I took a deep breathe as we exited the plane. It was time to wake up and figure out where the train station was so we could get to Rabat.

Following the signs, it was very easy to find the train station downstairs. There was an orange, ticket vending machine where you can buy train tickets. Fortunately, they had an English option so I took advantage and bought all our tickets needed for Morocco.

We waited a couple hours for our train to arrive and headed out! We had a short layover in Casa Port.

Casablanca Airport to Rabat by train only costs about 8 USD to person.

We left the Rabat Ville train station and headed over to our Airbnb.

After finding our way in what felt like a small maze, we checked into our Airbnb, and headed out to explore. We ended up around Hassan Tower.

I decided to spend some time, thinking about life.

After the brief thought, we headed south to explore more and found the Mausoleum of Mohammed V.

On the other side of the white light we found more to explore.

Soon after, we decided to walk along the coast and head north.

It’s such a beautiful view!

The Oudayas had plenty of blue to go around!

After a long day, we hit the sack. We got a good night’s rest and enjoyed our breakfast the next day.

After we fueled up, we walked to the train station to catch our train. This journey was longer, from Rabat to Fes. Keep in mind, that for longer distances, you get a seat. Find your train compartment on a board similar to the one below to prepare for your embarkment.

You can see from the below tickets the class (2nd), wagon (28), and seats (15, 17). Get to your seat quickly because someone may get there first and now you have the annoying “you’re in my seat” conversation sprinkled with tension (happened twice in front of us). I suspect shorter rides on the train may have no seat?

I’m a huge fan of their trains. Tickets were easy to buy from their orange, ticket vending machines. Second class seats were comfortable and not overcrowded. The best part? The train has a working AC 🙂

The bathroom was not a top performer when it came to bathrooms in general but definitely up there when it comes to public transportations bathroom. Their toilet couldn’t get any greener, bringing one immediately back to nature. Outside of their bathrooms, I’m a huge fan of Moroccan trains and the ease of purchasing their tickets 🙂

We arrived to Fes with no delay!

Be sure to never get in a cab right when you exit a train station in Morocco. You’ll be charge wild numbers you wouldn’t even pay in New York City! Prerequisite: Ask a local the price for a 10 minute cab ride to get a ballpark idea of what you should pay. Step 1: After exiting the trains station, orient yourself. Find large intersections or landmarks nearby to understand the direction you need to go. Step 2: Walk away from the train station, towards a busy road (not too busy where cars can’t easy stop) where cars are going the direction you need to go. Step 3: Hail your cab! It may take a couple tries to get a more local price but you’re much better off not getting crazy ripped off. Our cab ride to the Medina of Fes from the train station nearby was 2.71 USD total.

It’s easy to enter the Medina of Fes from the Blue Gate, which is actually green on the other side :O

But believe me, it is very easy to get lost! My title of Map Master, given to me in Vietnam from the Chinese friends I made over there, was no more. Finding the Airbnb was impossible. No one goes into the Medina of Fes and not get lost!

The tanneries are tricky to find. The one below is free to see from above. There are shops around where you can walk into and see it from their balconies. Easiest thing to do is check it out via a store. Just make sure to not accept any mint leaves from anyone.

We did eventually find the Airbnb. We booked a shared space, with our own room and bathroom, for 15 USD a night pp (includes breakfast).

The next day we explored what was outside of the Medina of Fes.

After another full day of exploring, we headed back home to rest. Before we go to sleep, please adhere to this pro trip: Don’t accept help from anyone when it comes to helping you find your Airbnb/hostel (unless you want to pay them cash) I know people who fell into the trap and weren’t left alone until they paid up.

After a well deserved rest, we woke up bright and early to catch our train to Marrakech. The Fes train station was beautiful at dawn.

If you don’t know already, there are oranges everywhere, even at their train station! (best orange juice in the world btw)

This train ride would end up being our longest distance train ride in Morocco (~6.5 hours). The inside of the train was very spacious.

The bathroom could have used a wipe or two…

We arrived to Marrakech in the early afternoon!

As always, once we got off of the cab, several people came up to us wanting to help us (for $$$ of course). I shut them all down and we met our Airbnb host at a nearby pharmacy. For $35 a night, we enjoyed this awesome Airbnb:

Some of the major attractions are Saadien’s tomb, El Badii Place, and Bahia Palace. The main problem we had while visiting them is how many large tourist groups were there. Saadien’s tomb was so packed we barely could move around. I highly suggest visiting Saadien’s tomb first thing in the morning and saving the palaces (which are much bigger with more space) for afterwards.

We walked all over Marrakech and discovered they had some pretty high walls.

We did a lot of walking and exploring in Marrakech 🙂

At the end of our trip, we caught a cab to the airport for $10.42. There’s really no escaping the higher price for cabs to airports.

Morocco is a very cheap country for those of us earning in USD. Our main expense, as always, was airfare. Only the flight from Marrakech to New York is including for this trip. Airfare was roughly 85% of our total expenses!

We have crossed the 50% mark! We’ve done an excellent job by cutting expenses where we can 🙂 So glad that we have reached our final flight in this crazy, 2 week journey!

Outside of the flight cost, as mentioned before, the average cost of food, lodging, and transportation was very cheap. ToT (“Trip over Trip”) she spent 6.04% of her budget, leaving her at 53.25%. Some highlights of her expenses, excluding airfare, are the following:

Being able to visit Marrakech and Fes, on top of Rabat, was great! I also love that we were able to include a new continent in our adventure.